This morning’s walk on the beach was graced with the largest eagle I have ever met – enormous back and shoulders, and he wasn’t even in flight. He perched like a Lord on driftwood throne and watched my dog with an expression that said, I am one bad-ass eagle, baby, so don’t come near me or you’re toast. She respected his boundaries and went the other way. I took his photo, but my camera zoom doesn’t do justice to subjects further than 20’ and nothing, aside from the visual experience, could do justice to that eagle. He became ingrained in my brain with the demeanor of a white-wigged barrister, not Rumpole of the Old Bailey – but someone far more pristine and noble, yet not unlike Rompole’s keen wit and knowledge of law and nature.

The view of the Olympics contains a new magnetic property, one that affects my eyes. Usually my eyes roam the skyscraping India ink ridges, and they trace peaks, while imagining valleys and other-worlds within, and between imaginings they keep watch on the ocean and its currents.  This morning they measured the coast and were drawn 5 miles inland where blanketing trees, one horse, two dogs, some cats and a very intriguing human being were sensed.  When I looked away, the long line of sea foam that delineates a changing tide had appeared – I missed its birth in my moments of distraction.

In penance I stood witness to the afterbirth and the frothy line changed shape – reminding me of a hospital room where the electronic heart-beat instrument displays the rise and fall of action potential reached: a spark, a peak, a dip and decreasing bounces with steadying aftermath only to reach its potential again.  A mirror image of the mountains and the feelings in my heart and body.

So often I arrive at the shore just at the point of tidal change and I wonder, does my body know? Does it hear the ocean stretching, pulling, relaxing, constricting and the silence of the pause between ocean’s breaths? Because in that silence, in that miniscule pause, my soul feels where the knowing exists. And I am so attracted to the knowing. 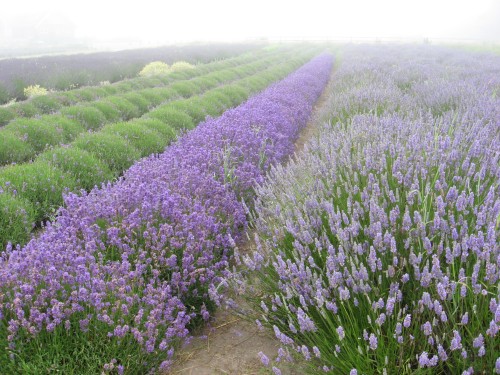 On the edge of this island farm, a crinkled, indigo ocean waits

below massive mountains that rise into snow-capped ridges,

like Samurai swords, slicing the blue with ice-pick white

defining the border where earth and sky meet.

as sunlight catches and flashes on their wings,

their cries falling high above the fog horn’s moan

You can’t see them, even though they are there.

You know, but knowing isn’t enough.

All you can see are tussocked rows of lavender and green

perspective points of view on this land at your feet.

Lines merging, and lost in the brilliant fog,

they tempt one to enter and stroke

the soft, yielding heads of mauve

knowing this is their moment

All the while  an egret stands – brilliant white