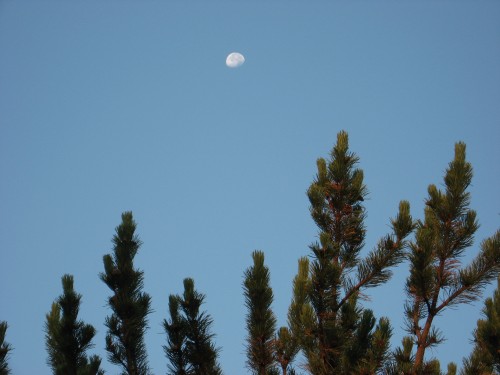 Spent the day with my grandson,

took him to the baseball game

and showed him how they play over here;

Here, where it’s not cricket and cream teas,

Taught him all the words that frame the game

and that made him sound cool when he spoke them,

and the other kids looked at him and smiled

We walked up the hillside, behind second base

where the grass is left to grow tall,

and I showed him how to pull a straw, suck on it

and chew the end, getting all the sweet goodness out,

letting the wispy fronds hang down like a half-woken flag,

too hot and too humid to raise itself and wave.

Bought him a piece of bubble gum and watched him chew,

saying with a wink, it might be best not to tell your Mummy

about this, seeing as she pays the dentist bills,

and then I showed him how to blow a bubble

and slap that darned gum all over his face.

how to hold it – real taut – between his thumbs

and keep them stood straight together, side by side,

and we blew until the screeching whistles made us jump,

and then his sounded like one of his Daddy’s farts.

Boy, you should ha’ seen his smile.

I could have canned his giggle and kept it

for cheering me up on lonely days.

When he stood up, leaned over and spit,

just like the pitcher and the other big boys,

I suggested that was one habit he might not want

to bring home to England from America.

They wouldn’t think it was too cool over there,

and he could even get arrested for doing it in public.

His eyes grew big and round, wondering if I was just

‘pulling his leg,’ another american turn of phrase,

but I didn’t see him spit anymore, and he sort of stared

under heavy, shaded brows every time he saw

one of those boys lean over and spit, as if

he was trying to figure out for himself why

they kept committing crimes in public.

I hoped I wasn’t confusing him too much.

After the long, hot day that passed in record time,

and after he turned the bath water brown,

I wrapped him up in a fluffy big towel,

held him on my lap, sitting on the porch rocker

and we sang the take me out to the ballgame song,

and his eyelids started to hang heavy, and I thought

I’d better get him inside and put his pj’s on,

before he’s too heavy with sleep to carry.

But then his eyes opened wide; he squirmed

and pulled his clean arm out of the towel wrappings.

He looked up into the sky, a sky that wasn’t quite sure

if it was finished for the day, cause it was still hanging on to the blue,

and the moon was rising up like it had places to go tonight,

and my grandson pointed to it, and he said,